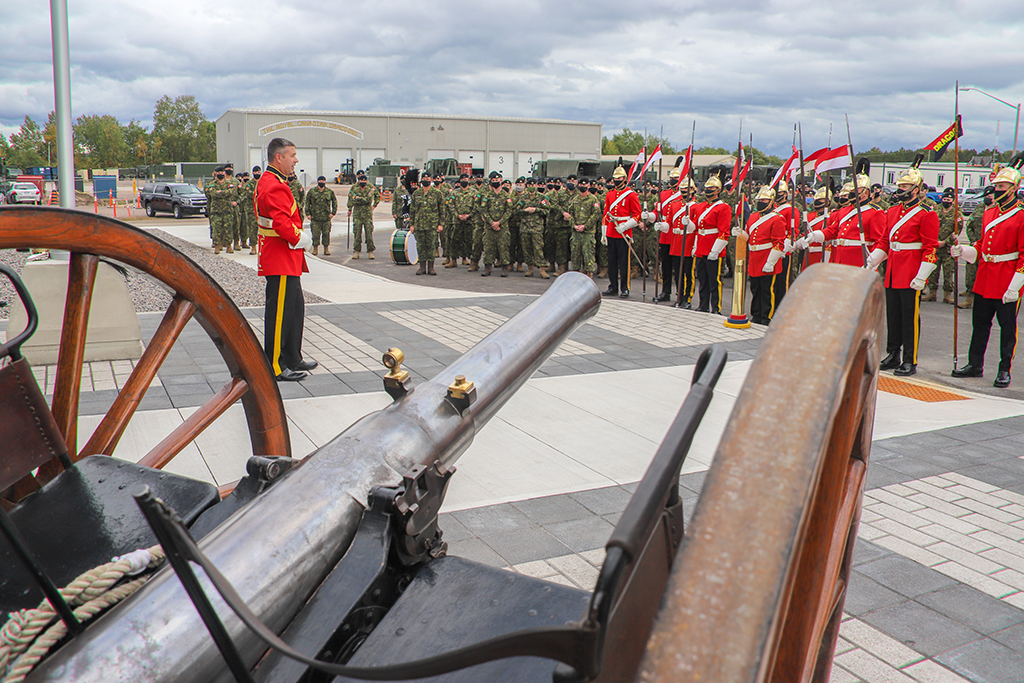 As I start my handover with LCol Nick Forsyth today, I wanted to send one final letter to all of you to close out my time as Commanding Officer. The past two years have been an unprecedented challenge for The Regiment and I am exceptionally proud of the work done by all ranks to keep motivated, supporting one another and maintaining their operational readiness through the pandemic. Together, we accomplished a tremendous amount and I’d be remiss if I didn’t give proper credit to those who kept us pointed in the right direction and pushing hard to overcome whatever challenges were in the way.

Since I arrived in the summer of 2020, we deployed two contingents of Dragoons to Latvia on Op REASSURANCE, including providing the Battle Group leadership with myself and the RSM. We augmented 2 CER and 2 RCHA as they provided contingents to Op UNIFIER in Ukraine as well as smaller numbers to Op IMP ACT in the Middle East. We maintained a near-constant state of Immediate Response Unit (IRU) readiness as the lead unit for 4th Canadian Division, ready to assist for domestic deployments. And throughout it all, we conducted our foundational training up to combat team live fire for C Sqn and squadron live fire for the light cavalry squadrons in Petawawa. All of this was done in the environment of constantly evolving force health protection measures and dealing with Dragoons out of action due to COVID. None of this would be possible without the exceptional resilience shown by the junior leaders in The Regiment who provided the right balance of a kick in the pants or a helping hand, as needed!

The past two years have also seen the introduction of cavalry structures and tactics to the Armoured Corps, meaning we have taken a first-principles look at how we manoeuvre and fight with various combinations of TAPVs, Coyotes and LAVs. We will also be the first unit in the
Army to field the new LA V Reconnaissance Surveillance System (LRSS), the next generation of surveillance equipment to complete the replacement of Coyote and complement the T APV in our light cavalry squadrons. By pushing boundaries on what aggressive and agile cavalry forces can do, The Regiment is setting the conditions for a new era in the Armoured Corps.

One of the personnel challenges we faced was the generation of young soldiers and officers who have arrived at The Regiment with very minimal field time – sometimes never having spent a night in the field before starting their Regimental time. So the burden of mentorship has never been more needed- and I’ve been impressed by how enthusiastic these junior soldiers have been to learn, as well as how diligent the leaders have been in taking care to show what is right. It would have been easy to write off this generation as ‘not having the right stuff to succeed’, yet Dragoons at every level took the time to explain the basics before moving on to the more complex tactics and fieldcraft that define our operational environment.

We’re likely to see more of the same in the near future, as Op PARADIGM will see civilians walk in the gate at CFB Petawawa, conducting all the basic and trade-specific training here rather than at the Recruit School in Saint-Jean or at the RCACS in Gagetown. The trial case will be for infantry recruits to be hosted by 1 RCR this summer but I can see this being expanded to other Combat Arms as the CAF looks to reduce the backlog of recruits waiting training.

The one feeling that is pre-eminent for me as I look back on my time as CO is gratitude. I feel fortunate to have been given the opportunity to command our Regiment, both in Canada and while deployed. Almost immediately after my change of command in 2020, we also conducted a change of appointment for the RSM, seeing CWO Jeramie Leamon moving up to be the Brigade Sergeant Major and bringing in CWO Stephane Larouche. Mr Larouche and I had never worked together before forming our command team, but I cannot have imagined a better partner to have spent the past two years with. I have appreciated his sound advice and steady guidance as we navigated both deployment and Regimental activities. We spent innumerable hours and kilometers on the road together, with both difficult conversations and much laughter.

I am also grateful to the officers and NCMs of The Regiment, who have worked so hard to accomplish the tasks put in front of us. Keeping track of our personnel, vehicles and equipment through the move to our new Worthington Barracks home, maintaining our training tempo and being prepared for whatever additional tasks came our way put significant stress on the soldiers and their families. I know that the work we’ve done comes at a cost measured in family occasions missed and plans cancelled, but the officers and senior NCMs have done their absolute best to provide as much predictability and stability as current conditions would allow. I’d like to thank the two Regimental 2ICs, Major John Maerz and Major Steve Boire, for keeping The Regiment on an even keel and providing fantastic mentoring to the officers. And I also need to thank the OCs and Squadron Sergeants Major for taking every opportunity they could to train their squadrons and care for their soldiers.

Last, but most importantly, I have to thank my family, both near and far. My wife, Teresa and daughter, Emily have endured a lot of busy days and nights, time away and additional stresses. But it’s no exaggeration to say I could not have done this without their consistent love and support. My next job as Deputy Commander, 4 CDSG is likely to provide a bit more stability around them in the near term. I wish all Dragoons everywhere a rewarding and relaxing summer and welcome to LCol Forsyth and his family as they start their own command journey!