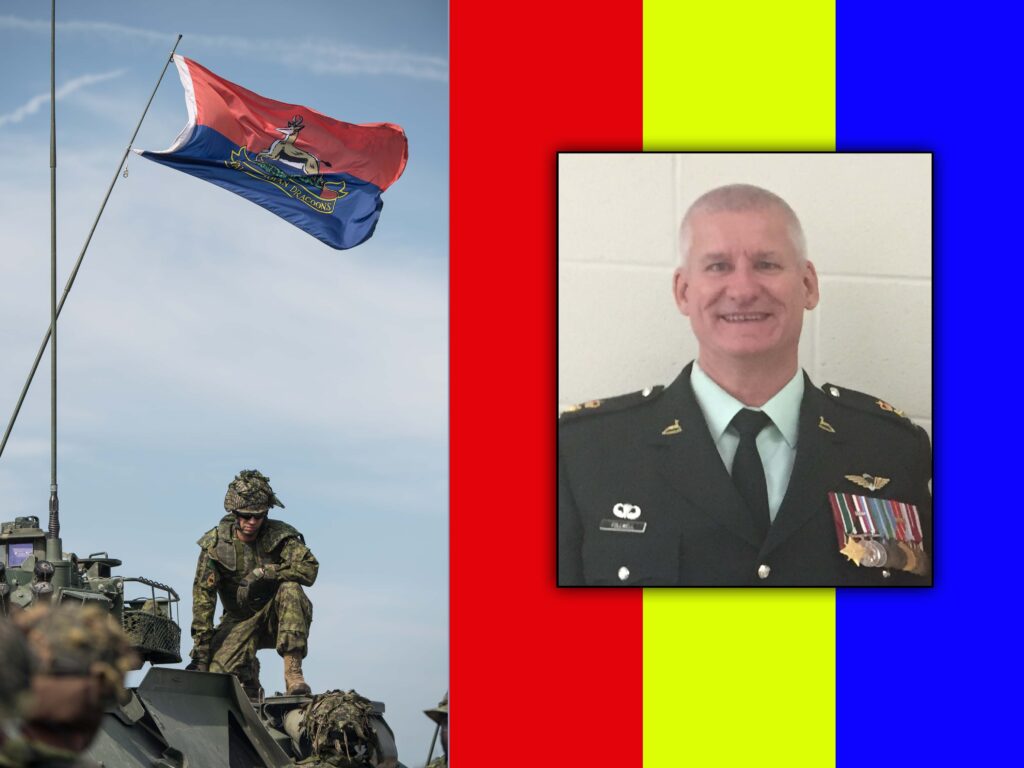 After 37 plus years of service, Lieutenant-Colonel (LCol) James (Jim) Follwell is officially retiring from the Canadian Armed Forces (CAF).

A native of Hamilton, Ontario, LCol Follwell enrolled in the CAF in 1984 upon graduation from the University of Waterloo. He was commissioned in the Royal Canadian Armoured Corps, serving in Lahr, Germany and Petawawa, Ontario with The Royal Canadian Dragoons (RCD) in various tank and reconnaissance roles.

LCol Follwell’s operational experience includes the following tours of duty: with NATO in Germany (1985-1987); as a Military Observer and the G3 with the United Nations Truce Supervision Organization in South Lebanon (1991-1993); as the G3 Operations with 2 Canadian Mechanized Brigade Group Headquarters during the military support to the 1997 Winnipeg Floods (Op ASSISTANCE); as Army Operations Staff providing military support to the Ice Storm (1998); and as the Task Force Chief of Staff and Commanding Officer of the National Command Element (2005) with the Canadian Contribution to NATO’s Force in Afghanistan. In 2010, he was deployed to the Pakistan floods as the military member of Canada’s interagency assessment team. Subsequently, he executed assistance operations in the Pacific as part of US Pacific Command staff, including the Thailand floods in 2011 and Philippines Typhoon in 2013, for which he was recognized by the USA with a Defense Meritorious Service Medal (DMSM).

Other leadership experiences include two years as a bilingual instructor and Commander at the Canadian Forces Leadership Academy, the Commanding Officer Rear for Operation CAVALIER 4 in Bosnia, and Chief Standards Officer and Squadron Commander at the Royal Canadian Armoured Corps School. LCol Follwell served with United States Army as the Canadian Liaison Officer in Fort Hood, Texas (1999-2002), where his efforts included the design and execution of field testing new combat systems and tactics, for which he we recognized with a USA Meritorious Service Medal (Army). From 2004 to 2007, as the Regimental Second-in-Command with the RCD, he led digital transformation and unit planning, including one year as the Acting Commanding Officer. LCol Follwell has also completed a tour with J35 at US Pacific Command Headquarters in Hawaii where he led international cooperation efforts within USPACOM, coordinated and participated in planning and exercises while promoting Canada throughout the Asia-Pacific theatre. Posted in 2015, LCol Follwell was assigned to United Nations Command (UNC) in the Republic of Korea as the Canadian Contingent Commander, Deputy U3 Operations, and Director of the UNC Multinational Coordination Centre where he contributed to command readiness and integration and led UNC revitalization, developing theatre SOPs for operations and integration activities of all participating nations and designing/executing UNC exercises, for which he was recognized with a second US DMSM.

As a Staff officer, LCol Follwell has been posted to a Mechanized Brigade Group as the G3 Operations, and to Army Headquarters Staff (Operations) where he led planning and preparation for the United Nations Standby forces and Canada-United States continental defence. Posted to Canada’s Expeditionary Force Command in 2007, LCol Follwell led the Crisis Operations Division (J35), authored a new Canadian Forces’ international disaster response plan, and created Canada’s Afghanistan campaign plan as J5. In 2010, LCol Follwell led the crisis planning and execution for the military humanitarian relief deployment to Haiti, for which he was recognized with a CDS Commendation, and subsequently led the coordination efforts of Canada’s mission transition in Afghanistan. In July 2014, LCol Follwell was employed at Joint Task Force Pacific as the Assistant Chief of Staff J5 and J3 Land Operations in Esquimalt, British Columbia where he was responsible for planning and coordinating all Joint Operations for the area, including disaster response coordination and preparation. His last tour was with a NATO

high readiness multinational Brigade in Romania where LCol Follwell was the G7 and senior multinational officer on staff, designing formation SOPs and planning/executing exercises and training to ensure the multinational brigade’s high readiness for NATO where he was awarded a Romania Meritorious Service Medal and Bulgarian Chief of Defence commendation.

LCol Follwell holds a Bachelor of Arts degree in Sociology from the University of Waterloo and a Master of Arts in Organizational Leadership & Training from Royal Roads University. He is also a graduate from the US Army Command and General Staff College.

LCol Follwell and battle-buddy Nancy have met and worked with so many great people during their journey from around the world, it would take pages to do justice to their contributions. To all though, our lives were made richer by knowing each and every one of you. Professionally, special thanks go to the Regimental family and unit leadership teams who were with us every step of the way, both in Canada and from all over the world. Moving into the next chapter of life, Jim will attempt to repay the support and sacrifices made by his family by enjoying time together. Jim and Nancy are settling in Ottawa to re-establish family traditions and friendships but intend on enjoying retirement by remaining active with travel, scuba diving and hockey.