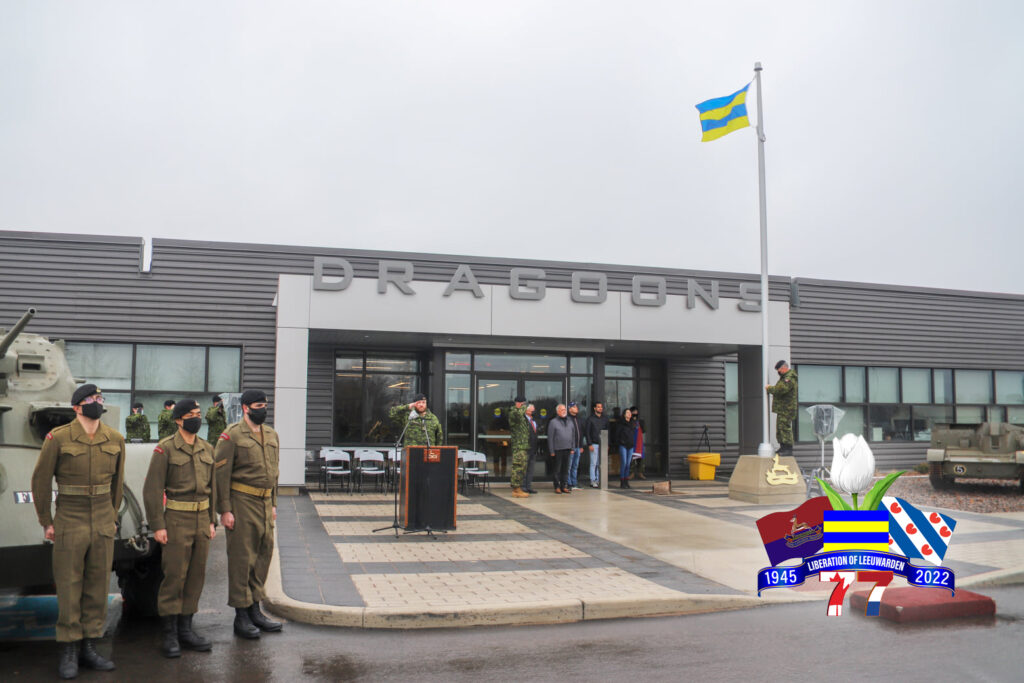 On behalf of the President of the Guild and the entire Regimental Family of The Royal Canadian Dragoons, we wish everyone a happy anniversary of this culminating event during a key for our regiment.

We celebrate Leeuwarden not just for the liberation of one city, but because Leeuwarden’s liberation represents a pivotal achievement as part of the Regiment’s role in liberating a huge portion of the Dutch province of Friesland in 1945. It is a time for reflection to remember not only those Dragoons of the time, but also the brave Dutch citizens who endured such hardship.

Even today, after 77 years, the connection and friendship between the city and the regiment endures as strong as ever. Each year the RCD and the City of Leeuwarden celebrate the Liberation on April 15th with a parade and a flag ceremony. On this day, the Regiment flies the flag of Leeuwarden and the City of Leeuwarden flies the flag of The Royal Canadian Dragoons. . In some cases, the celebrations are more elaborate, with the Regiment sending soldiers to the celebrations in Holland. The Dragoons have adopted Jannetze Jetten, who was born almost to the second the Regiment entered the town as a Honourary member of the RCD Association. As well, the Regiment was presented with a Frisian clock (the Leeuwarden clock), which now hangs in the Regimental Headquarters.

It is a special day marked by both groups - this year, the regiment gathered on parade in front of the Regimental building to honour the courage and accomplishments of Dragoons past. 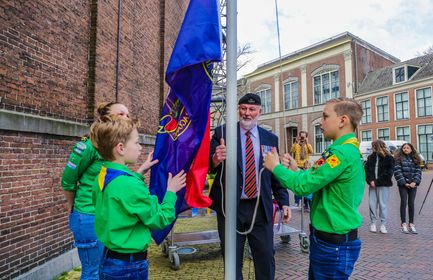 BGen Atkinson (ret'd) joins the children of Leeuwarden as they raise the RCD flag at city hall.

To commemorate this 77th anniversary of the actions, Project ‘44 has created a story map of Dragoon operations.  It’s an outstanding product made in coordination between the great Project 44 team and our own Guild historical lead – Tom Skelding.

Leeuwarden is a story that has everything: adventure, bravery, derring-do, damsels in distress and Dragoons. But it is not about a party, its about the final campaign of the Dragoons in the Second World War.

In February 1945, The Royal Canadian Dragoons, as part of the 5th Canadian Division, ceased activities in Italy and began the move to Northwest Europe. The Regiment, with their

Staghound armoured cars, landed in Marseilles, France and began a long road move to Vorselaar, Belgium, arriving on the 23rd of March 1945 and being assigned as the Corps Reconnaissance element of the 1st Canadian Corps.

The main Allied thrust, which had now reached and was crossing the Rhine River, had bypassed the coastal areas of France, Belgium and Holland. It was these areas that the Canadians were tasked to clear, specifically the opening of the supply route north through Arnhem, Holland.

During the end of March and beginning of April 1945, the Dragoons waited for movement orders and trained under then Commanding Officer Lieutenant-Colonel K.D. Landell. In early April, the Regiment was transferred to 2nd Canadian Corps, under command of General Guy Simonds. “A” Squadron was detached to 3rd Canadian Infantry Division as a flank guard to the east.

With the enemy in disarray, The Regiment received orders from Corps Headquarters to advance with all speed straight for the North Sea with the object of completely disrupting German communications and assist in the liberation of Friesland Province. The time had come for The RCD to conduct classic cavalry work: tearing through the enemy’s rear, destroying his lines of communications, and taking advantage of every black track and rickety bridge to put the enemy off balance and keep pushing him.

On the 8th and 9th of April 1945, the advance began with The Royal Canadian Dragoons leading 2nd Corps advance on the east side of the Ijsselmeer. The Regiment advanced as a screen with two squadrons forward – C Squadron right and D Squadron Left. The Regiment met sporadic and demoralized resistance.

Near the village of Lettele, Lieutenant Charles Jones’ troop from D Squadron was in the lead when they were stopped by heavy anti-tank, mortar and machine gun fire. Jones’ troop overran the position, capturing eight mortars, a 75mm anti-tank gun, two ammunition vehicles, at least 20 enemy killed and another 22 taken prisoner”. For their outstanding efforts Lt Jones and his Troop Sgt, Sgt Westwood were awarded the Military Cross and Military Medal respectively.

By April 10th, a breakthrough was achieved across the River Vecht at Ommen and the order was sent out for the Dragoons to push through at best speed. They were to proceed cross-country in a north-westerly direction through the province of Friesland toward its capital of Leeuwarden. Their task was to cut all main communication routes originating from the city, then isolate and if possible, capture the city.

Through the 12th - 14th of April, the Regiment moved northwest towards Leeuwarden meeting and capturing small groups of Germans as well as liberating 20 Allied POW’s from a hospital. At Mildam, “D” Squadron forced a bridgehead over the Tjonger Canal during a bitter, five hour struggle. They were joined by “B” Squadron, who fought a series of sharp local actions, capturing stores, equipment and prisoners.

As they passed through the small Dutch villages, the town’s people pulled out their orange banners and flags to welcome the RCD.

The Regiment had advanced 130 miles, capturing and killing many of the enemy and destroying a great deal of their equipment. On the night of 13th April 1945 The Royal Canadian Dragoons had cut the German line of communication between Leeuwarden and Groningen and had established liaison with the highly organized and very efficient forces of the Dutch Underground and Resistance movement.

Sunday the 15th of April 1945 found the Regiment consolidated on the territory gained in the previous day’s push. B Squadron, stretching west from Dokkum (northeast of Leeuwarden on the coast) received word that the Germans had left Leeuwarden. Word was also received that the Dutch were engaging remnants of the German Garrison. C Squadron was sent to reconnoitre.

In due course – damn quickly considered ground, enemy and distance involved – C Squadron was in position to clear Leeuwarden from the east. Lieutenant Harry Watson1 had the Hy Tp in supporting fire positions and the Recce Tps were ready to move in to the city. At that moment Major Bud Veitch was ordered to hold C Squadron in their positions and await further orders. The next thing Harry observed was the sight of RHQ coming down the road in their Greyhound Armoured Cars driving into the town centre and setting up in one of the finest hotels. And so Regimental Headquarters liberated Leeuwarden at 1100 hours, 15 April 1945.

C Squadron then entered Leeuwarden, under drizzling rain where they found the streets deserted except for isolated groups of armed Dutchmen. Sporadic gunfire was still being exchanged, but with the approach of armoured cars, the remaining Germans withdrew. Cheering crowds began to fill the streets and national flags were taken from their hiding places as the people cried, laughed and embraced the Canadians.

All the jails in the area were bulging with German prisoners for by now the count had risen to 3,000 and still the weary Wehrmacht poured in under escort. Vast stocks of munitions, parks of artillery and vehicles were taken as well as dumps of gasoline and other fuels. Huge stocks of food were captured and promptly turned over to the Dutch Patriots. Dutchmen turned against collaborators in their midst and violence and local unrest swept the area so that in addition to their military duties, the Dragoons became temporary local administrators, judges and policemen. A Squadron rejoined the Regiment after being relieved from its flank guard task on the night of 15 April.

⁃ In the final action of the campaign on 16 April, B Squadron fought off a German amphibious assault from Schiermonnikoog Island off coast at Oostmahorn near Dokkum as remaining German troops tried to escape east while the regiment pushed east.

Worthington, Larry, The Spur and the Sprocket 1968

Reprinted with permission from the Guild of the Royal Canadian Dragoons historian.

Posted in Regiment News
← The Passing of Alfred JohnsonRV22 Update →