The Regimental Catechism is presented here in order to educate the general public with respect to the Royal Canadian Dragoons and the traditions the Regiment observes.

A printed version is given to every new trooper upon joining - they must study it and know it by rote as they are quizzed on its contents throughout their military career.

2. Cavalryman: in armies of the late 18th and 19th centuries, a cavalryman, especially a heavily armed cavalryman. The word is retained in the names of some modern regiments that were originally cavalry regiments.

Abbreviation
RCD: Members of the Regiment maybe known and referred to as Dragoons.

Role of Armour
To defeat the enemy through the aggressive use of firepower and battlefield mobility.

Role of The Royal Canadian Dragoons
To provide armour support and the armoured reconnaissance squadron to 2 CMBG operations.

The badge worn by the Regiment originates from the Boer War. In July 1900 while a troop of the Regiment was on outpost duty in South Africa, all seemed quiet but a sentry reported to his officer that a number of Springboks, a South African gazelle, were bounding frequently into the air as though alarmed. The officer immediately ordered a stand-to in time to drive off an attack by a large party of Boers who had managed a stealthy approach to the outpost. The Commanding Officer, LCol Lessard, on hearing of this event, requested authority to take the Springbok bounding as the Regimental Badge. In 1913, Royal approval to wear the Springbok as the Regimental Cap and Collar badge was given. The badge designed is a Springbok bounding on a velt (grassed) surface surmounted on a scroll. 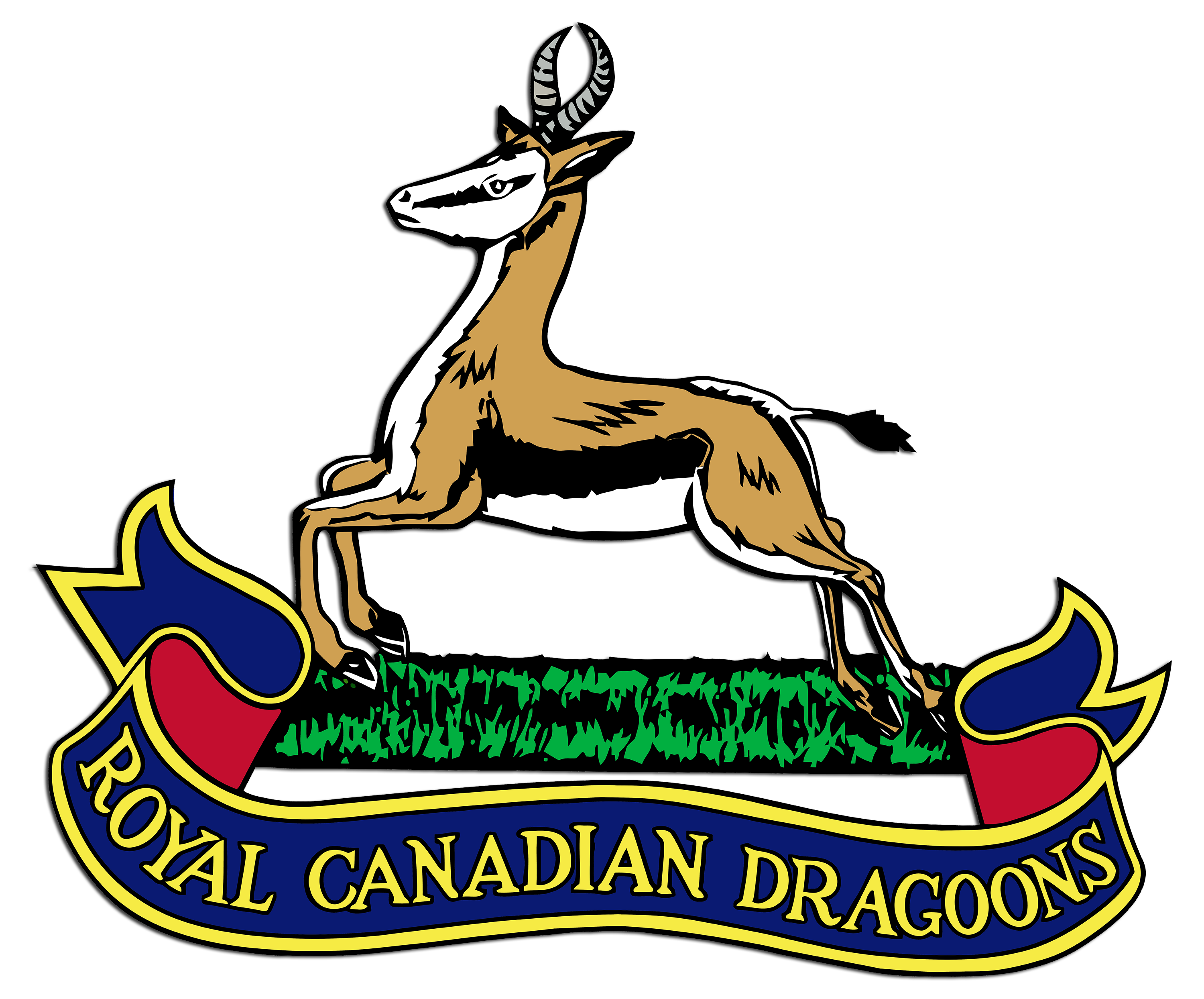 On 24 May 1893, the designated title of the Regiment, “The Royal Canadian Dragoons” was authorized. Also authorized at this time was the wearing of The Royal Cypher V.R.I. surmounted by the Imperial Crown. The Royal Cypher of the present day is still worn on buttons of regimental pattern. 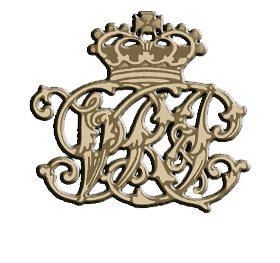 Leeuwarden Day - 15 April
Leeuwarden Day celebrates the liberation of the town of Leeuwarden. It is observed by raising the flag of the city Leeuwarden at the home of the Regiment, located at CFB Petawawa as well as operational locations. A similar ceremony takes place in Leeuwarden, Holland, with the raising of the Regimental flag to commemorate their Liberation on the 15th of April 1945.

Leliefontein Day - 7 November
The celebration of Leliefontein commemorates the actions of The Royal Canadian Dragoons during the Boer War and their achievement of 3 Victoria Crosses. It is observed by the reunion of present and former Dragoons, as well as a Regimental Dinner and a remembrance parade.

Grace
May we be strong in virtue,
Firm in time of trouble,
And always ready to help others in time of need.
May we be blessed by God,
As we share this food,
And as we live and work together,
For the good of all.
AMEN

Solders of God! Arise
Lift up you battle cry,
In armour strong, in action wise
Prepare to die.
Rise o’er a fallen world
Your banner to the sky;
The Honours of your God Unfurl’d
The righteousness of fly!
In his great cause be brave!
Defend against the foe!
You go in Jesus’s name to save
The world from sin and woe.
The risen Lord of all
Preserve you from ill,
You shall find peace to hear the call,
And trust in God’s own will.

Blessed and Eternal God,
In whose providence our days are constantly surrounded,
We thank you for the challenge of life.
We praise you for the good we may do.
Help us to lay hold on every opportunity to serve others.
Inspire us to give our best in the cause of truth and righteousness.
When we carry the torch of enlightenment,
Or wear the cloak of privilege,
Or stand in the place of honour,
Enable us to dedicate ourselves to the welfare of humanity,
And the preservation of justice and love.
We thank you for the renewing of hope
That brightens the present and lightens the future.
Through this hope, make us not ashamed to defend your laws
And extend your kingdom.
Help us to improve the extent of our gratitude to you
By the depth of our devotion.
Use us as instruments of good will:
While there is doubt, or despair, or oppression:
Teach us to communicate faith and hope and courage.
Let the beauty of the Lord be upon us,
And establish the work of our hands in
righteousness and peace.
AMEN

* The former affiliation was the 1st Royal Dragoons which amalgamated
with The Royal Horse Guards (The Blues) in 1969, to become the Blues and
Royals.

A Battle Honour is an award of a right by a Government or Sovereign to a military unit to emblazon the name of a battle or operation on its flags ("colours"), uniforms or other accessories where ornamentation is possible.

In the case of The Royal Canadian Dragoons the Battle Honours can be found on our Guidon which is held with the unit at Garrison Petawawa.

The Battle Honours awarded to the Regiment are as follows:

Those names not in boldface are not emblazoned on the Guidon

Will be used at all ceremonial parades for the march past in quick time and whenever the Guidon is marched on or off parade.

Will be used for all March Pasts in slow time and for all Roll Past in vehicles.

A piece composed for Leliefontein in 1976 by the Bandmaster of the 21st Lancers, P.D. Conibear.

With their superior speed and carbine firepower they were the shock troops of their day. Gradually their role was assimilated to that of the Cavalry proper and consequently followed the rules of precedence in that arm of the service. The precedence continues in the Royal Canadian Armoured Corps and The Royal Canadian Dragoons have the honour of precedence within the Corps.

The carrying of colours into battle goes back into the dimmest of distant history. The Israelites carried their sacred standard into battle. The Eagles of Rome, in comparison, are almost modern in the passage of time.

It is through more or less the knights of medieval days that the British Army and subsequently the Common Wealth Armies trace the tradition of individual regimental colours. Knights flew their armourial bearing on their pennants so that their own following of bowmen and men-at-arms would know their location and where to ally in the heat of battle.

A cavalry regiment carried as its banner a Guidon which is derived from the French Guydhomme or guideman, who was formerly the carrier of the cavalry regiment’s banner. Ever since, Guidons have been carried by cavalry in the British Army. 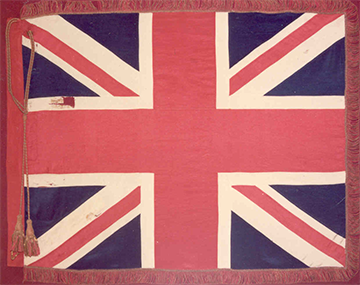 This was presented to the Regiment by His Excellency, The Earl of Minto. The Governor General of Canada in Toronto on 12 November 1904. Although a cavalry regiment, but having served in South Africa as mounted rifles, the Regiment was so honoured by the King who became Colonel-in- Chief of the Regiment. The King’s Banner is currently held in the Regimental Archives at Garrison Petawawa. 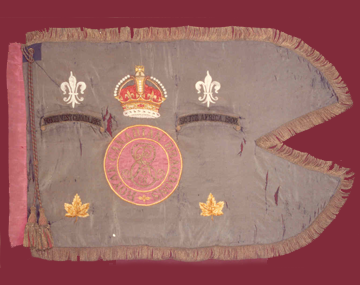 This was presented to the Regiment by King George V (then the Duke of Cornwall and York) in Toronto on 11 October 1901. The battle honours “North- West Canada 1885” and “South Africa 1900” were emblazoned on this standard as was also the badge of that time, The Royal Cypher and in gold on crimson “Royal Canadian Dragoons”. The Standard is currently held in the Garrison Petawawa museum. 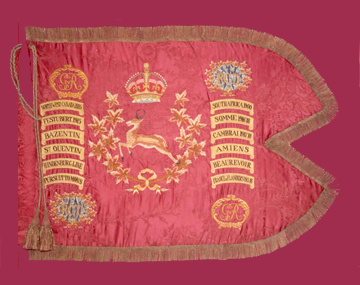 This was delivered to the Regiment in Belgium and was first carried on parade at Amiens when a detachment of the Regiment dedicated a memorial tablet in the Cathedral of that city. It was officially presented to the Regiment at Bramshott Camp, England, by His Royal Highness Prince Arthur of Connaught in 1919. The Springbok was emblazoned on this Guidon. In January 1931, the ten additional battle honours of the First World War were approved for emblazonment on the Guidon. The second Guidon is currently layed up in St. George's Chapel, Garrison Petawawa. 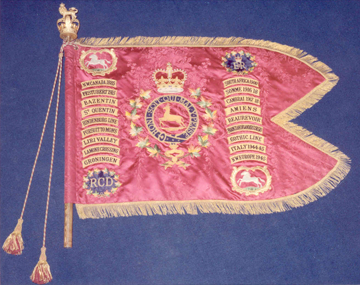 This was presented to the Regiment by His Excellency The Governor General of Canada, General G.P. Vanier, at Camp Gagetown, NB on 23 May 1964. It carries the battle honours of the Regiment including those approved for emblazonment from the Second World War. The Third Guidon was hung at Beechwood National Cemetary on 27 April 2012. 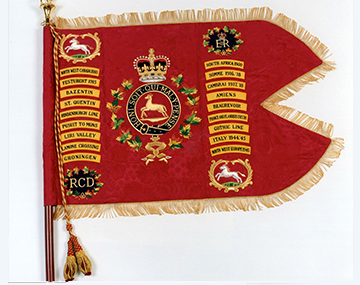 The new Guidon was presented to the Regiment during the summer of 1998.  It is a replacement of the third Guidon which was worn from operations in Germany, Cyprus, and the former Republic of Yugoslavia. It presently is in service with the Regiment at Garrison Petawawa.

Today, because of its historic and sentimental value, it is no longer carried in action or by a unit in a theatre of war. However, it continues to be a visible symbol of pride, honour, and devotion to sovereign and country. When presented, Guidons are consecrated by the Chaplain General assisted by the unit chaplain(s). Through these means, the Guidon is sanctified and devoted to service as a symbol of honour and duty and all members of the unit, regardless of classification, dedicate themselves to constancy in the maintenance of these qualities. Once consecrated, Guidons are closely guarded and, when uncased, they are honoured by the appropriate compliment. Every effort must be made to prevent the loss of the Guidons to enemy forces. Any regiment serving overseas at the outbreak of hostilities shall return their Guidons to Canada. It is to be destroyed on threat of capture by hostile elements.

In cavalry regiments, the Guidon is carried by the senior MWO and escorted by the two senior WOs with a Sgt as Guidon Orderly. In the past, when cavalry soldiers had to provide their own horses, the class of private soldiers which any cavalry regiment attracted were generally of much higher standing than those who would gravitate to regiments of foot.

The only personnel allowed to handle the Guidon are the Guidon Bearer, COs of the regiment, Colonels and former Honorary Colonels of the Regiment and the RSM.

Once the Guidon is requested, be it a parade or social function, an appointment is to be made with the Regimental Adjutant who unlocks the case so the Bearer can retrieve the Guidon.

On return, the Adjutant must be informed and after the Guidon is returned to its case, the Guidon Party will proceed with the Adjutant to have the traditional glass of sherry with the CO and toast the regiment.

Once drawn and until it is placed back in the case, the Guidon Party is responsible at all times for the security and safe keeping of the latter and will not leave it unguarded.

New Guidons will not be carried on parade until they have been consecrated and no compliments are to be paid until consecration has been done. Once consecrated and presented, they shall be accorded the highest honours at all times and treated with the greatest respect and care. When a Guidon replaces a Guidon that is declared non-serviceable, they are presented and consecrated in the same manner as a new Guidon. Because of their symbolism and purpose, Guidons belong in a separate class from flags and are not paraded with other flags in any colour party. Guidons are not uncased after retreat or before sunrise unless the location of the parade is illuminated. Guidons are never uncased in inclement weather. If the Guidon is wet, it shall be hung to dry before returning to it’s case.

Commanding Officers are responsible for the safeguarding, care, maintenance, and appropriate manner of display of the Guidon. When at rest, the Guidon will be displayed in the RCD main foyer in a secure case under 24 hour, 7 day a week guard.

Return To Top
Scroll To Top